For information on the blaster's standard features, see Recon CS-6.

It was available for purchase only during Black Friday 2009 at Walmart.

It was the first of four sub-series color variations of the Recon CS-6. 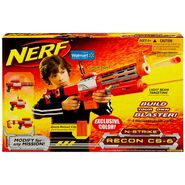