The Recon CQ-12 is a close quarters Nerf blaster that was released in 2019 under the N-Strike Elite series.

It comes packaged with a barrel extension, a twelve dart clip, twelve Elite Darts, and instructions.

The Recon CQ-12 is a re-release of the N-Strike Modulus Recon MKII. It functions exactly the same as previous versions, and other than the color schemes, they are virtually identical both internally and externally. 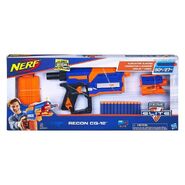 The packaging for the Recon CQ-12.
Community content is available under CC-BY-SA unless otherwise noted.