The Recoil is an X-Shot blaster that was released in 2018.

The Recoil is a small single-fire blaster. Its unique feature is that the top shell of the blaster "recoils" or "kicks back" when the blaster is fired - both of its names reference this function. The firing trigger primes the recoil mechanism in a similar fashion to that of a dual-action priming mechanism.

It has two dart holders underneath its muzzle.

It advertises a firing range of up to ninety feet (seventy meters).

The Recoil was re-released within the same year, under the alternates name of Kickback and Pulse. It was also later re-released under the Adventure Force brand as the Hypershot and Recoil.

In 2021, it was re-released under the Royale sub-series as the Kickback. The name would be used again for the Dino Attack Kickback.

The Recoil has been released with the following color schemes:

The Royale variant of the Recoil. 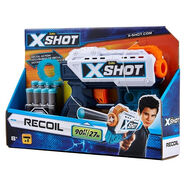 The packaging for the Recoil. 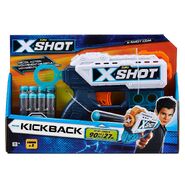 The packaging for the Kickback. 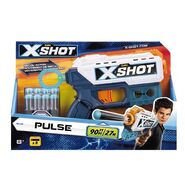 The packaging for the Pulse.