Not to be confused with the Nerf Overwatch Reaper Blaster.

The Reaper is a Buzz Bee blaster that was released in 2016 under the Ultra-Tek sub-series.

It comes packaged with an eight dart clip and eight Long Distance Darts.

The Reaper is a clip-fed blaster. The blaster has a slide on top of it, which functions as a priming handle.

It advertises a firing range of up to fifty feet (fifteen meters).

The Reaper re-released with updated internals, boosting its firing range claim up to seventy-two feet (twenty-two meters). This version was re-released later under the Air Warriors line in a new color scheme.

The Reaper has been released with the following color schemes:

Two Reapers are packaged in the Star/Reaper/Gem Set.

The packaging for the Reaper.

Updated packaging for the Reaper. 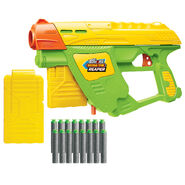 The green, yellow, and orange Reaper.

The blue, yellow, and orange Reaper.

Back side of packaging.

8-dart Flip Clip won't fit into the Reaper without cutting notches in the shell
Add a photo to this gallery
Retrieved from "https://nerf.fandom.com/wiki/Reaper?oldid=191404"
Community content is available under CC-BY-SA unless otherwise noted.