This is an article about the 2013 Rayven Stinger. For other uses, see Rayven.

The Rayven Stinger is a Nerf blaster that was released in 2013 under the N-Strike Elite series. It requires four "AA" batteries to be operated.

It comes packaged with a twelve dart clip and twenty-five Elite Darts.[1]

It is a Sam's Club exclusive.[citation needed]

The Rayven Stinger is a battery-operated flywheel clip system blaster. It features a carry handle and an integrated shoulder stock; an extra clip can be stored in the stock. It is compatible with removable barrel extensions.

It has two tactical rails, one atop the carry handle and one on the right side of the blaster. It also has three sling points, one above the muzzle and two built into the shoulder stock.

It was first revealed on September 9, 2013, when an Amazon post leaked information on the blaster. The blaster never had an official announcement from Hasbro and had a quiet release sometime later that year. 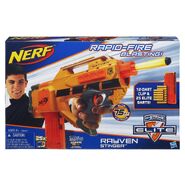 The packaging for the Rayven Stinger.