This is an article about the N-Strike Rayven CS-18. For other uses, see Rayven.

The Rayven CS-18 is a clip system Nerf blaster that was released on March 3, 2012 under the Light It Up sub-series. It requires four "AA" batteries to be operated.

It comes packaged with a Firefly Tech clip, eighteen Glow-In-The-Dark Darts, and instructions.

The Rayven is a semi-automatic clip system blaster. It has two tactical rails; one on top of the carry handle and another on the right side of the blaster. The hatch jam door is located on the top of the blaster. It is also compatible with barrel extensions, but is not packaged with one. There are two holes for a sling to be attached on the top and bottom of the integrated stock, and another on the front of the tactical rail. At the end of the carry handle, there is a small pin that can be lined up with the tactical rail to create an iron sight.

Due to the blasters bullpup design (with the clip being placed behind the handle), the Rayven is able to have a long barrel and still be compact. The bullpup design of the blaster and the position of the front grip are very comfortable.

Like all clip system blasters, the Rayven is compatible with any type of clip or drum. However, left-handed users may find it difficult to hold and operate the blaster with a thirty-five dart drum inserted. This may also hinder the mobility of right-handed users as the drum will slam into their body if held too close.

The Rayven has many safety mechanisms in it. When opening the jam door or removing the clip, the Rayven has a quick rev-down function. It directs induced currents from the motors to short into the batteries. The blaster's flywheels cannot be revved without a clip inserted and the jam door closed, and the trigger cannot be pulled without revving the blaster's flywheels first.

It was succeeded by the N-Strike Elite Rayven CS-18 in 2013. The Elite version itself got two re-releases: the Rayven Stinger of the same year, and the RayvenFire in 2017. 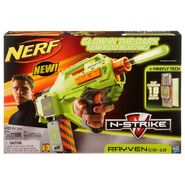 The packaging for the Rayven CS-18. 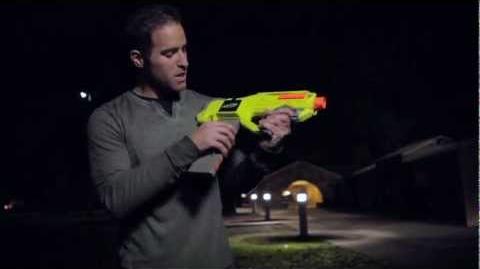 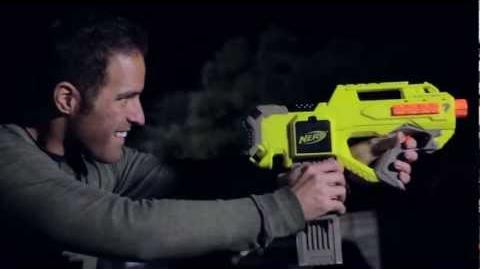 Nerf Light It Up Inside Blast N-Strike Rayven