This is an article about the N-Strike Elite Rayven CS-18. For other uses, see Rayven.

The Rayven CS-18 is a clip system Nerf blaster that was released in 2013 under the N-Strike Elite series. It requires four "AA" batteries to be operated.

It comes packaged with a Firefly Tech clip and eighteen Glow-In-The-Dark Darts.

The Rayven is a medium-sized bullpup blaster that has been updated from its original counterpart to feature long-distance performance. It is much stronger and louder than the original.

It features two tactical rails: one on top of the blaster's integrated carrying handle and the other on the right side of the blaster. It is compatible with barrel extensions, despite not being packaged with one. The blaster also features four attachment points for a sling or a Bandolier Strap: two above the muzzle and one each at the upper and lower corners of the rear stock.

The Rayven was first discovered on the back of a Glow-In-The-Dark Elite Dart package, alongside the Stryfe and Retaliator.

It is the direct successor of the N-Strike Rayven CS-18.

Another re-release of the blaster was released in 2013, called the Rayven Stinger.

In 2017, the RayvenFire was introduced as a direct successor to the Rayven CS-18. 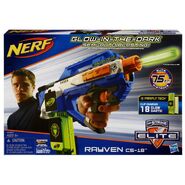 The Rayven CS-18 equipped with a twelve dart clip, a Retaliator barrel extension, and an Assault Grip.
Add a photo to this gallery