This is an article about the 2017 RayvenFire. For other uses, see Rayven.

The RayvenFire is a Nerf blaster that was released in 2017 under the N-Strike Elite series. It requires four "AA" batteries to be operated.

It comes packaged with a clear ten dart clip and twenty-five Elite Darts.

The RayvenFire is a battery-operated clip system semi-automatic flywheel blaster. It features an integrated shoulder stock, as well as a carry handle. It is compatible with detachable barrel extensions.

It has two tactical rails - one built into the carry handle and one on the right-hand side of the blaster - and two strap points.

Its included clip is known to snap during shipping.[1] The twenty-five dart drum also has compatibility issues with the RayvenFire, as it will not latch in properly. 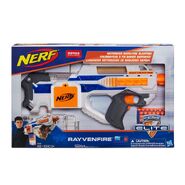 The packaging for the RayvenFire. 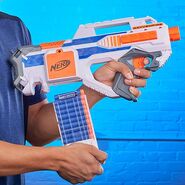 A Nerf model reloading the RayvenFire. 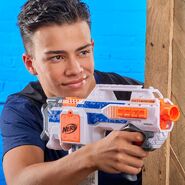 A Nerf model aiming the RayvenFire. 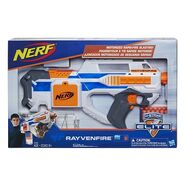 The packaging for the RayvenFire, without the "Kohl's Exclusive" logo.