The Ravager is a Nerf blaster that was released in fall of 2016 under the Alien Menace series.

The Ravager is a pump-action Nerf blaster. It holds up to eight darts at a time; the large orange turret rotates after each shot. The turret has a series of air restrictors that allow the turret to hold multiple darts. It has one large strap point built into the back end of the blaster. Above the firing trigger, there is clear purple plastic that gives a view of the blaster's internals, similar to Doomlands 2169 blasters.

The Ravager's turret sometimes doesn't fully rotate and can cause jams. Unlike many blasters, the jam is a mechanical jam instead of a dart jam. The reason may be the turret's weight, which seems badly balanced, especially when more darts are depleted. Furthermore, the turret's rotation mechanism engages after each shot, meaning that it is driven by the piston's power, which can make rotations less reliable.

The Ravager was announced at the 2016 Toy Fair, alongside the Incisor.

Later, the Ravager was given a blue color scheme and released with darts identical to that of the Voidcaster.[1] This variant is extremely rare.

The Ravager has been released with the following color schemes: 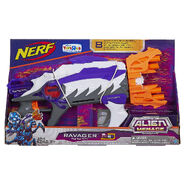 The packaging for the Ravager.

A pre-release render of the Ravager.

The blue variant of the Ravager in its packaging.
Add a photo to this gallery

Retrieved from "https://nerf.fandom.com/wiki/Ravager?oldid=193074"
Community content is available under CC-BY-SA unless otherwise noted.