The Raptor-Slash is a Nerf blaster that will be released in 2022 under the DinoSquad series.

The Raptor-Slash is a revolver-style blaster similar to the Elite 2.0 Commander RD-6. As its name suggest, it is based on the Velociraptor species of dinosaur. The blaster features a cylinder which holds up to six darts and auto-advances after firing. It also has slam fire capabilities. 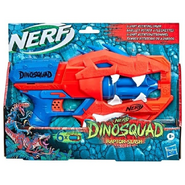 The packaging for the Raptor-Slash