The Raptor is a Dart Zone blaster that was released in 2014.

The Raptor is a bow-action blaster, fired similarly to blasters such as the Rebelle Heartbreaker Bow or the N-Strike Mega Mega ThunderBow. It features storage for three darts in the top bow arm.

It advertises a firing range of up to seventy feet (twenty-one meters).

The Raptor was re-released as the Air Zone Xtreme Dart Bow.

It was re-released in 2015 with a green color scheme.

The Raptor has been released with the following color schemes: 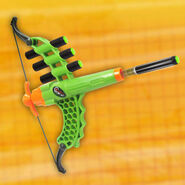 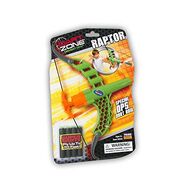 The packaging for the green Raptor.