The Rapid Reload Blaster is a Nerf blaster that was released in 2017 to promote the film Spider-Man: Homecoming.

The Rapid Reload Blaster is a wrist-mounted blaster, similar to the 2016 Stark Strike and War Machine Battle Gauntlet. It uses little cartridge ammunition holders to fire darts, akin to that of Nerf's clip system; these slot into place in the muzzle, taking the spot traditionally where a turret or cylinder would be located. Darts can be loaded into the cartridge after it has been loaded onto the blaster. Removing cartridges is done by pushing the priming slide towards the muzzle[1]; this unlocks the cartridge for removal.

The blaster itself uses smart air restrictors, allowing any dart to fire out of any of the three barrels.[1]

It also lacks a firing trigger, and is instead fired via pulling down a lever that mimic's Spider-Man's iconic Web-Shooters. The blaster has adjustable wrist straps, allowing it to be fit to any size person.[1] 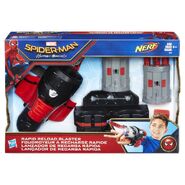 The packaging for the Rapid Reload Blaster. 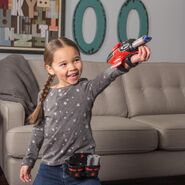 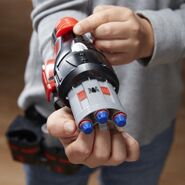 The Rapid Reload Blaster being primed.