The Rapid Glow is a clip system Nerf blaster that was released in fall of 2014 under the Super Stripes Collection sub-series.

The Rapid Glow features the use of a Firefly Tech clip, which "charges" the darts so they will glow in the dark. It also features a single tactical rail located on the blaster's priming mechanism, an integrated shoulder stock, and a single sling point on the end of the shoulder stock. Due to the placement of the clip well, a clip loaded into the blaster can double as a foregrip, but only if it is big enough.

The blaster's priming mechanism is similar to that of an N-Strike Recon CS-6 or N-Strike Elite Retaliator.

The Rapid Glow was re-released in 2016 as the Allegiant Blaster to promote the Divergent series. The ten dart Firefly Tech clip was replaced with a blue twelve dart clip. 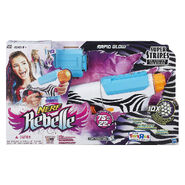 The packaging for the Rapid Glow. 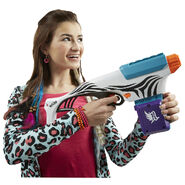 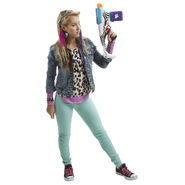 A Nerf model holding the Rapid Glow.
Add a photo to this gallery
Retrieved from "https://nerf.fandom.com/wiki/Rapid_Glow?oldid=179176"
Community content is available under CC-BY-SA unless otherwise noted.