The Rapid Fire Blaster Scooter is a Nerf-branded Flybar product that was released in 2019. Its blaster feature requires six "C" batteries to be operated.

The Rapid Fire Blaster Scooter, as its name may suggest, is a three-wheeled kick scooter that has blaster functionality built into the handlebars.

The blaster portion is a battery-operated flywheel system, and also features the use of the clip system popularized by N-Strike blasters. It is fully integrated into the handlebars and cannot be removed. It features two barrels, with a clip well for each. A jam door is located on top of the blaster, and a firing button is located next to each handlebar.

It advertises a firing range of up to forty feet (twelve meters). 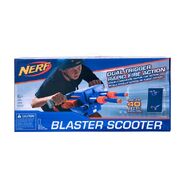 The packaging for the Rapid Fire Blaster Scooter. 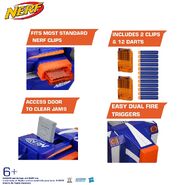 Functions of the Rapid Fire Blaster Scooter. The diagram implies that the blaster comes with two N-Strike Elite six dart clips, however, its clips are completely different. 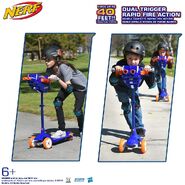 Retrieved from "https://nerf.fandom.com/wiki/Rapid_Fire_Blaster_Scooter?oldid=187191"
Community content is available under CC-BY-SA unless otherwise noted.