The Rapid Fire AS-20 is an air system Nerf blaster that was released in 2010 under the N-Strike series.

The Rapid Fire AS-20 is an air-powered blaster with a rotating turret that can hold twenty darts at a time. It also has a round switch on the side that allows the user to switch between a fast firing automatic mode, which fires all of its darts quickly, and a slower, semi-automatic mode, which uses less air but only fires one dart per trigger pull.

To reload the Rapid Fire, load up to twenty darts into the each of the blaster's barrels. The blaster is then pumped and filled with air; about twenty five pumps are needed for the blaster to fire at maximum power.

Pull the trigger to fire darts. 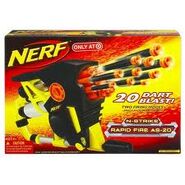 The packaging for the Rapid Fire AS-20.

Updated packaging for the Rapid Fire AS-20.