The Range Master is a Buzz Bee blaster that was released in 2012 under the Air Blasters Extreme sub-series.

The Range Master features a scope that attaches to the top tactical rail, similar to a Nerf tactical rail. It also features a barrel extension that can be screwed onto the muzzle, as well as a foldable, adjustable bipod that can be detached from the blaster. It has an integrated shoulder stock.

The blaster is loaded from the right of the blaster via a dart slot located above the "Bolt Action" sticker.

The Range Master has been released with the following color schemes:

Pull the trigger to fire the dart. 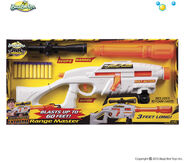 The packaging for the blue, black, and orange Range Master. 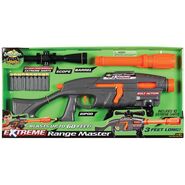 The packaging for the gray, black, and orange Range Master.
Add a photo to this gallery

Retrieved from "https://nerf.fandom.com/wiki/Range_Master?oldid=191818"
Community content is available under CC-BY-SA unless otherwise noted.