The Rampage is a Nerf blaster that was released on August 1, 2012, under the N-Strike Elite series.

It comes packaged with a twenty-five dart drum, twenty-five Elite Darts, and instructions.

The Rampage is a pump-action clip system blaster. Clips and drums load into the blaster horizontally. This can block the user's view if they are right-handed. The blaster is able to be slam fired and has a rifled barrel. It is compatible with detachable shoulder stocks, despite not coming packaged with one. On the end of the shoulder stock attachment point is a priming indicator, which turns orange when the blaster is primed. A single dart can be stored in the blaster's grip.

It features two tactical rails on top of the blaster, as well as a strap point built into its trigger grip.

Using an eighteen dart clip may cause some discomfort, due to the way clips are horizontally fed into the blaster.

The Rampage is a direct successor to the 2009 N-Strike Raider Rapid Fire CS-35.

Early mock-ups of the blaster[1] included a tactical rail shield that would have been much like the Blast Shield or the Nitron shield. The idea was dropped due to unknown reasons.

In 2014, a clear blue Rampage was released under the Sonic ICE series.

In 2015, a variant was released with Elite XD range claims, and featured a color scheme very similar to the original blaster, with notably fewer paint operations.

In 2019, the Rampage was re-released with a white color scheme, a Retaliator shoulder stock, and an eighteen dart clip instead of a twenty-five dart drum.

The Rampage has been released with the following color schemes:

It was offered in a special value pack including the Rampage itself, the twenty-five dart drum, an extra N-Strike Elite eighteen dart clip, and forty-three Elite Darts. 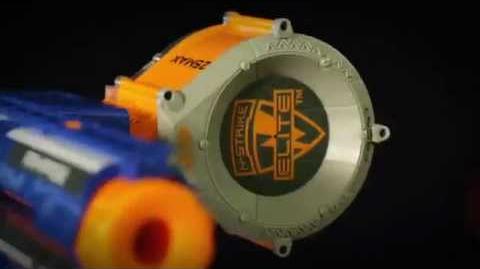 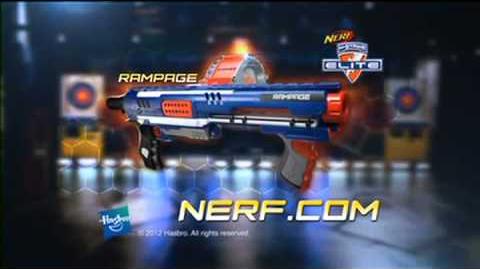 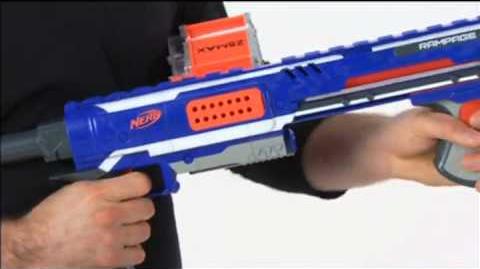