Not to be confused with the Super Soaker of the same name or Micro RL.

The RL is a Nerf blaster that was released in fall of 2019 to promote the video game Fortnite.

The RL is based on the Rocket Launcher weapon from Fortnite. It has two oversized aiming sights and a shoulder stock. Similar to the 2015 N-Strike ThunderBlast, it lacks a firing trigger and instead functions as a pump-action HAMP blaster. The front barrel extends mid-prime. 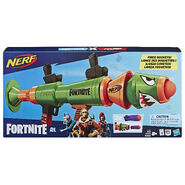 The packaging for the RL.

An image of the RL, promoting the "Summer Block Party" in-game event.