RIVAL is a series of Nerf ball blasters that was released in fall of 2015.

It is not available in stores in Australia due to toy safety requirements.[1]

The RIVAL series is designed for Nerfers ages fourteen and up in mind, as it features high-performance, "100 FPS" blasters for "competitive team-based play."[2] Most RIVAL blasters are magazine-fed, however, the Artemis XVII-3000 and the Kronos XVIII-500 uses an internal magazine, while the Nemesis MXVII-10K and the Prometheus MXVIII-20K are both fed with a hopper. RIVAL blasters also feature a tactical rail very different from the standard tactical rail. Each blaster features a mechanical safety that must be disengaged before the blaster's acceleration trigger or firing trigger can be pulled.

The RIVAL series was first announced at the 2015 New York Toy Fair.

The Camo Series features blasters with a camouflage color scheme, and is similar to the BattleCamo Series of N-Strike Elite.

Edge Series focuses on accuracy and precision. All blasters exclusive to the sub-series have a sniper-styled feel to them and feature long barrels. All re-released blasters contain some new addition, such as a holster, or the thirty round drum.

Phantom Corps features non-team based re-released, and some exclusive blasters, that all feature a black and white coloring with the Phantom Corps logo.

To account for having no specific team color, each Phantom Corps blaster comes packaged with two colored attachable lanyards (referred to as "flags"), one colored red and one colored blue. Flags can be attached to any of the blaster's sling mounts, but some users prefer to wear their team flag on their body so it is more visible to their target. 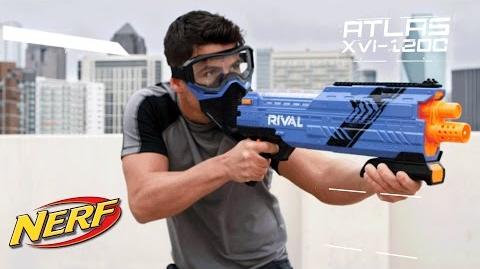 NERF Rival - 'World Of' Official T.V. Spot
Add a photo to this gallery