The RADS 12 is a Buzz Bee blaster that was released in 2011 under the Air Blasters series.

It was re-released under the Air Warriors series.

This blaster is sold under the Ruff Stuff Air Blasters line in Finland.

To reload the RADS 12, place up to twelve darts in the blaster: three darts for each of the four barrel clusters. Pull back the top lever to prime and rotate the blaster.

Pull the trigger to fire a dart. 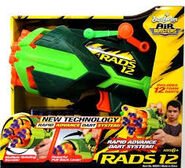 The packaging of the Finland-exclusive Ruff Stuff Air Blasters RADS 12.
Add a photo to this gallery
Retrieved from "https://nerf.fandom.com/wiki/RADS_12?oldid=152234"
Community content is available under CC-BY-SA unless otherwise noted.