The Quickfire Sniper is an Air Zone blaster that was released in 2011.

It comes packaged with a scope, a barrel extension, a detachable shoulder stock, a six dart clip, six Quickfire Darts, and instructions.

The Quickfire Sniper is a clip-fed blaster similar to that of the 2010 Nerf N-Strike Longstrike CS-6. It advertises three different blaster "modes" on the back of the packaging: Short Range Mode, Long Range Mode, and Expert Mode; modes do not affect how the blaster is fired or its performance. Two clips can be stored in the shoulder stock if it is attached. There is a rail on the top of the faux magazine, and another on top of the carry handle.

The Destroyer XL re-release of the Quickfire Sniper added a breech-loading opening on the right side of the blaster.

The Quickfire Sniper and its included clip are not compatible with Nerf darts, due to the their length.

The Quickfire Sniper had a re-release with a white color scheme and updated packaging.

It was later re-released again as the Destroyer XL when the Air Zone brand changed its name to Stats Blast; this re-release had alternate names for different languages, including the Destructor XL and the Carabine XL.

The Quickfire Sniper has been released in the following color schemes: 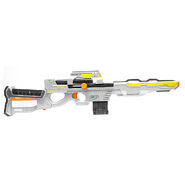 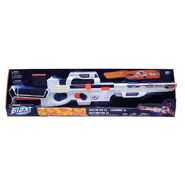 The packaging for the Destructor XL.

The Destructor XL being breech-loaded. 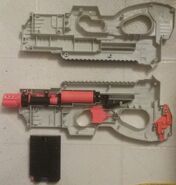 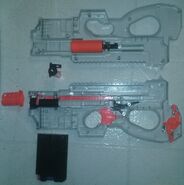 Destroyer XL internals with barrel and plunger displaced.
Add a photo to this gallery
Retrieved from "https://nerf.fandom.com/wiki/Quickfire_Sniper?oldid=195190"
Community content is available under CC-BY-SA unless otherwise noted.