The Quickfire Auto Fed Belt Blaster is an Air Zone blaster that was released in 2011. It requires six "AA" batteries to be operated.

It comes packaged with a detachable shoulder stock, a twenty-five dart belt, and twenty-five Quickfire Darts.

The Quickfire Auto Fed Belt Blaster is a fully-automatic belt-fed blaster. It features an included detachable shoulder stock; despite this, it is only compatible with the stock included with it. While the blaster appears to be have an integrated clip, the for-show clip actually houses the batteries. A power switch is located on the left side of the blaster. Similarly to battery-operated blasters like the Nerf N-Strike Barricade RV-10 and the Dart Tag Swarmfire, it does not feature an acceleration trigger to rev up the flywheels prior to actually firing the blaster.

It advertises a firing range of up to thirty feet (nine meters).[1]

It is a re-release of the Dart Zone Belt Blaster. 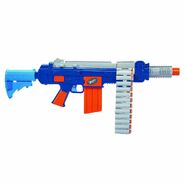