The Quick 16 is a Nerf blaster that was released in 2011 under the Dart Tag series.

The Quick 16 features an integrated sixteen dart clip, loaded from the left of the blaster. It has no tactical rail and, despite appearances, is not compatible with any existing N-Strike shoulder stocks. The blaster has a single strap point located on the end of its trigger grip.

This blaster's priming mechanism is located under the barrel and is able to slam fire at very high rates.

While some Sonic Micro Darts will work, Streamline Darts, Micro Darts, and Elite Darts will cause the blaster to frequently jam in the curved part of the clip. This is mainly because the retainer inside the internal clip is specifically designed for Tagger Darts whose heads are wider than their body.

If a dart is jammed, it is usually when loading a dart into the barrel. The back will usually get jammed between the door and the edge of the clip. This will damage the darts and sometimes the only way to get the dart out is to remove the part of the dart above the door, the part that is blocking the dart from loading properly.

Modification to this blaster is slightly difficult due to the extra plastic on the blaster; this may have been done on purpose by Nerf and Hasbro to keep people from modifying blasters used in the Nerf Dart Tag League.

The packaging for the Quick 16. 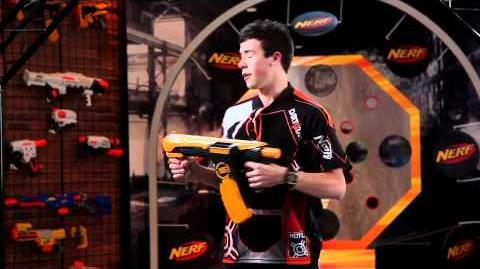