Nerf Wiki
Register
Don't have an account?
Sign In
Advertisement
in: Under construction, Article stubs, Adventure Force blasters,
and 5 more

The Quatroblast is an Adventure Force blaster that was released in 2017.

The Adventure Force Quatroblast is a pump-action blaster with four cylinders, each holding six darts. The blaster features a secondary trigger for cycling between cylinders. Side cylinders can be removed for separate reloading. A faux accessory rail is located above the cylinders. 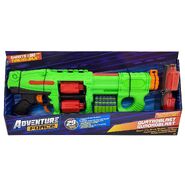 The packaging for the Quatroblast. 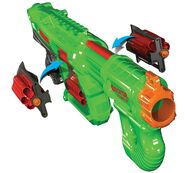 The Quatroblast having its side cylinders removed.
Community content is available under CC-BY-SA unless otherwise noted.