The Quantum is an Adventure Force blaster that was released in 2018 under the Tactical Strike series. It requires six "D" batteries to be operated.

The Quantum is a battery-operated automatic flywheel blaster. It features a hopper that can hold up to a hundred rounds at a time, similar to the Nerf RIVAL Nemesis MXVII-10K. A slide door reveals the access port for loading rounds in. The hopper can be removed by flipping a blue piece upwards and pushing the hopper release button, located on either side of the blaster.

It is compatible with Nerf RIVAL High-Impact Rounds, as well as the Rechargeable Battery Pack accessory. 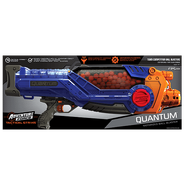 The packaging for the Quantum. 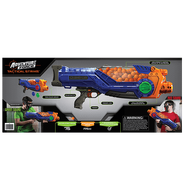 The back of the packaging for the Quantum. 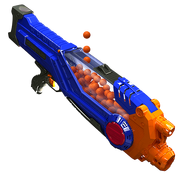 A 3D render of the Quantum being loaded. 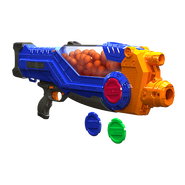 A 3D render of the Quantum, with its detachable team color plates.