Not to be confused with the Super Soaker version of the Pump SG.

The Pump SG is a Nerf blaster that was released in April of 2021 to promote the video game Fortnite.

The Pump SG is a pump-action breech-loaded blaster. It is based on the pump shotgun weapon from Fortnite. The breech is located on the left side of the muzzle. Pulling back the pump unlocks the breech and pushing forward will automatically close the breech.

Despite not advertising it as such and having a very small capacity, The Pump SG can be slam fired.

The Pump SG was first leaked in late 2020 through online listings. 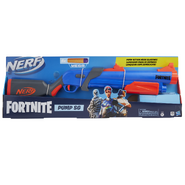 The packaging for the Pump SG. 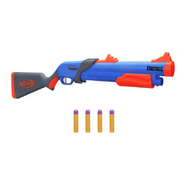 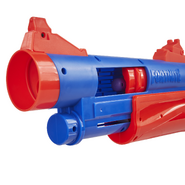 A close up of Pump SG's breech.

The packaging for the Pump SG with the gray trigger.