For information on the blaster's standard features, see Proton.

The Sonic Proton is a clear green version of the Vortex Proton that was released in 2012 under the Sonic Series.

It is the first alternate color scheme of the Proton, the second being the 2013 white re-release.

To reload the Proton, pull back the disc tray until it is completely out of the blaster. Load a disc into the groove in the tray and push down on one of the slide return levers located on either side of the blaster.

To fire a disc, pull back the trigger. 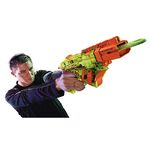 A model with a Sonic Proton.
Add a photo to this gallery
Retrieved from "https://nerf.fandom.com/wiki/Proton_(Sonic)?oldid=179173"
Community content is available under CC-BY-SA unless otherwise noted.