The Prometheus MXVIII-20K is a Nerf blaster that was released in fall of 2018 under the Phantom Corps sub-series.[1]

It comes packaged with two-hundred High-Impact Rounds, a rechargeable NiMH battery, a charger, two team flags, a shoulder strap, a hopper and instructions.

The Prometheus MXVIII-20K is a fully-automatic flywheel blaster. It is similar to the Nemesis MXVII-10K, as both are fully automatic hopper-fed blasters that use a conveyor system, meaning that it could generally be regarded as the successor to the Nemesis MXVII-10K. As with the Nemesis, the hopper is removable. It features two tactical rails, one on top and a very small one on the bottom, a reversible carry handle on the front, and a sling mount underneath the barrel. The trigger area is located on another carry handle in the back, where another sling mount can be found. On the trigger grip, there is a light that displays the amount of energy left in the battery.

It advertises a rate of fire of up to eight rounds per second.

Experience the intensity of this Nerf Rival blaster that bombards opponents with up to 8 rounds per second*! The Prometheus MXVIII-20K blaster is fully motorized and holds a whopping 200 rounds in its easy-loading hopper. It comes with a rechargeable NiMh battery, so theres no need to stock up on batteries to power up this juggernaut. Take aim and fire rounds at a velocity of 100 feet per second (30 meters per second). The Prometheus MXVII-20K blaster comes with 200 high-impact rounds and has a trigger lock, tactical rail, and shoulder strap. This blaster is part of the Phantom Corps, a group of rogue specialists who may join Team Red or Team Blue today, then challenge them tomorrow. Wear the included red and blue flags to join Team Red or Team Blue, or use them in capture-the-flag battles. Head into battle and rake the competition with a volley of high-impact rounds from the Nerf Rival Prometheus MXVIII-20K blaster! https://nerf.hasbro.com/en-us/product/nerf-rival-prometheus-mxviii-20-k:38507A6D-4AA2-438E-BB71-48EA36741348

The Prometheus was originally leaked in summer of 2017, along with other Phantom Corps blasters such as the Hades XVIII-6000, the Helios XVIII-700, and the Kronos XVIII-500. The video containing the leaked blaster showed it as a prototype blaster, the only part of the blaster that was colored was the muzzle. Its name was also originally unknown until a distributor website unintentionally revealed its name.[2] 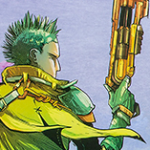 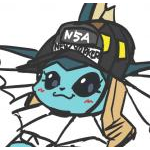 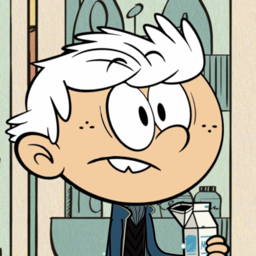 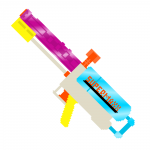 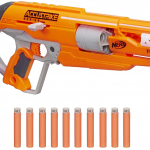