The Praxis is a Nerf blaster that was released on September 10, 2011, under the Vortex series.

It comes packaged with a shoulder stock, one ten disc magazine, and ten XLR Discs.

The Praxis is a long blaster similar to the Alpha Trooper CS-18 and Recon CS-6; like the former, it has an underhand pump-action loading system.

It features a tactical rail on top of the blaster above the magazine well. It also has an attachment point for detachable shoulder stocks, as well as a medium-sized hole behind the tactical rail and on the muzzle's iron sights where a strap can be attached. An unjamming switch sits high on the right side.

The Praxis is not compatible with the Retaliator shoulder stock.

The Praxis was re-released in March of 2012 as the Light It Up Lumitron.

The Praxis has been released with the following color schemes:

The Praxis was included in the Vigilon & Praxis Set, alongside the Vigilon, two ten disc magazines, and fifty-five XLR Discs. 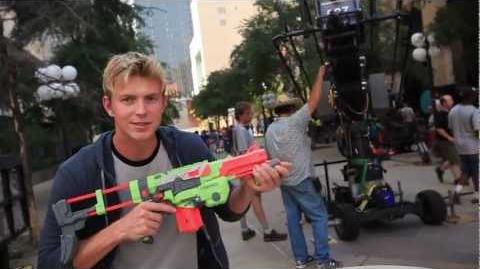 NERF VORTEX Inside Blast - PRAXIS
Add a photo to this gallery