The Powermech is a Buzz Bee blaster that was released in 2019 under the Air Warriors series. It requires four "AA" batteries to be operated.

The Powermech is a battery-operated flywheel blaster that fires in automatic fashion. It holds up to twenty darts in its turret. Darts are loaded into it by the exposed sides; additional access can be uncovered by opening up and flipping back the front muzzle section of the blaster. The turret advances counter-clockwise[1], and can be manually advanced when not firing. It has an integrated shoulder stock and an accessory rail.

Similar to older Buzz Bee blasters, such as the Tommy 20 or Automatic 20, the Powermech has a two-step trigger, where a half pull activates and revs up the flywheel system, and a full pull fires darts. 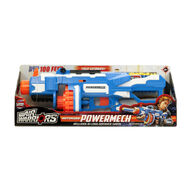 The packaging for the Powermech. 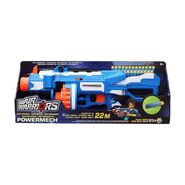 Alternate packaging for the Powermech.

The muzzle of the Powermech being lifted up.