The Powerball is a Dart Zone ball blaster that was released in 2018 under the BallistixOps series.

It comes packaged with an eight round hopper, eight Power Strike Rounds and instructions.

The Powerball is a Nerf RIVAL-style blaster that is fed through the use of its included hopper. It can be removed from the blaster via lever just in front of where it connects to the blaster. This loading port is compatible with RIVAL magazines, allowing Nerf High-Impact Rounds and RIVAL magazines to be loaded into the Powerball.[1] It also has a safety lock located just in front of the trigger guard, as well as an unjamming button on the side of the blaster.

The Powerball has been released in the following color schemes:

The Powerball is included in both the Mega Force and Battle Squadron blaster sets. 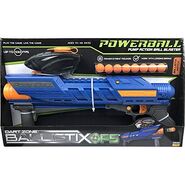 The packaging for the Powerball.

A model aiming the Powerball. 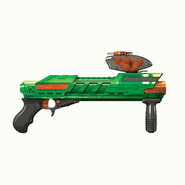 The green variant of the Powerball.