The Power Strike 48 is an Air Zone blaster that was released in 2010. It requires four "AA" batteries to be operated.

It comes packaged with a shoulder stock, forty-eight Quickfire Darts, and instructions.

The Power Strike 48 is a semi-automatic flywheel blaster; unlike other motorized flywheel blasters, it does not feature a functional firing trigger—as the yellow trigger is a false one—and instead uses a HAMP-system to fire it.

It has an integrated drum that can hold up to forty-eight darts at a time, with twelve chambers that each hold four darts. It can be reloaded two ways, either with direct access to the twelve chambers, or quick access to a single chamber on the right side of the blaster.

The front muzzle part of the blaster locks the drum access, and the button release to open it is located underneath. The drum advances counter-clockwise when the pump is pulled back; when it is pushed forward, a single dart is pushed into the flywheels to be fired.

The on-off switch for the flywheels sits on top of the blaster, just behind the integrated drum. Similar to the 2010 Nerf N-Strike Barricade RV-10, once the blaster is switched on, they turn on and begin to rev up automatically.

The Power Strike 48 cannot fire Nerf Elite Darts without modification to the dart advancing system, since they are longer than the included darts.[2] The blaster can accept ULTRA Darts stock, but performance is reduced with them.

The flywheel system will fire any type of Micro Dart, but the dart-advancing system is designed for shorter darts, and the "tooth" that allows single darts to be fed into the right side without opening the front hatch is ineffective for darts that lack a larger-diameter suction cup on the front. So, although shorter X-Shot Darts will work fine, if the blaster is pointed downward or jostled, they will fall out the front (all the way, or partially, which will cause a jam on the next pump when the drum rotates).

To reload the Power Strike 48, flip up the front part of the blaster to reveal drum access. Load up to forty-eight darts into it, then lock the front part back down into place.

Alternatively, darts can be fed through a quick-access point on the right side of the blaster.

Turn on the blaster and wait for the flywheels to rev up. Pull back the pump, and push it forward to fire a dart. 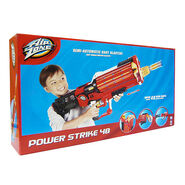 The packaging for the Power Strike 48.

The Power Strike's front hatch open; loading in Elite Darts will cause the final one to stick out.