The pinpoint sight is a Nerf tactical rail accessory that was released in 2008 under the N-Strike series. It is powered by two "AAA" batteries.

The pinpoint sight is designed to resemble modern reflex sights, but does not work like a conventional red dot sight. It can be attached to any blaster that has a tactical rail.

The pinpoint sight utilizes an extremely dim laser module, while the lens is at an angle. This allows the use of the pinpoint sight without demonstrating to opponents what they are aiming at as the laser does not pass through. Even without the red dot, there are crosshairs that one can use to aim.

After the pinpoint sight's initial discontinuation, they became rather valuable, often selling for over 70 USD on eBay for a used set, and over 100 USD for a new in box set.

It was re-released under the N-Strike Elite series with a new color scheme as a limited edition Singapore and Hong Kong Toys "R" Us exclusive.[1] There were plans to re-release it again in Australia and New Zealand for a limited time as well, with Farmers stores in New Zealand offering an Elite-colored pinpoint sight as a promotional giveaway with the purchase of an N-Strike Elite blaster as of late November of 2012.[2]

In 2014, it was re-released in South Korea, resulting in a temporary drop of aftermarket prices.

The pinpoint sight has been released in the following color schemes: 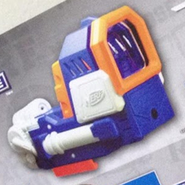 The packaging for the N-Strike pinpoint sight.

The packaging for the N-Strike Elite pinpoint sight.