The Phoenix CS-6 is a clip system Nerf blaster that was released in fall of 2020 under the Elite 2.0 series. It requires four "AA" batteries to be operated.

It comes packaged with a scope, a six dart clip, twelve Elite 2.0 Darts, and instructions.

The Phoenix was first leaked via imageless listings online in early 2020. Later that year, images of the blaster began to surface.

It was re-released in 2021 as the Phoenix CS-10, with additional accessories previously available with other blasters. 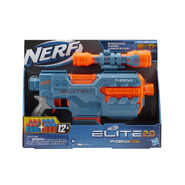 The packaging for the Phoenix CS-6.

A 3D render of the Phoenix.