It comes packaged with a rechargeable NiMH battery, a charger, a hopper, and fifty High-Impact Rounds.

The Perses MXIX-5000 is a medium-sized flywheel and conveyor-powered blaster. It features an integrated shoulder stock. Under its grip is a single sling mount. The acceleration trigger is located directly under the firing trigger.

On the top of the blaster is the Perses' hopper, which can hold up to fifty High-Impact Rounds at a time. The hopper is removable by pressing a lever on the side of the blaster and sliding the hopper out of the top. An iron sight is built at the front of the blaster, above its muzzle.

Like other RIVAL blasters, it has a safety switch, which locks the acceleration trigger. A tactical rail is located on the underside of the barrel. The jam button is located on the left, for when the blaster malfunctions. In addition, there is a jam door in front of the hopper. The Perses' rechargeable battery is inserted into the grip in from of the handguard and trigger. The Perses is not compatible with the RIVAL Rechargeable Battery Pack.

The Perses was originally leaked online in January 2019, alongside the Revoltinator.

The Perses has been released with the following color schemes: 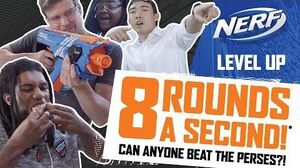