The PHARAOH is a Nerf blaster that was released on October 1st, 2020 under the ULTRA series.

It comes packaged with a ten dart clip, ten ULTRA Darts, and instructions.

The PHARAOH is a clip-fed bolt-action blaster. The bolt itself is a turn-bolt style one, which flips down and into place after priming. It features an integrated scope, permanently fixed to the blaster. It has one tactical rail and has one sling point above the muzzle. A jam door is located on the left side. There is also a clip storage in the stock to hold an extra clip.

The PHARAOH was first leaked in early 2020 though online listings lacking images, under the name SEVEN. In March, a sketch of a prototype model of the SEVEN was leaked, which was mistakenly identified as the SIX.[2] In early April, images of what was believed to the final design for the SEVEN were leaked. However, changes were made during development and production of the blaster, which ultimately changed its name and appearance to that of the PHARAOH.

The packaging for the PHARAOH. 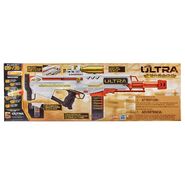 The back of the packaging for the PHARAOH.