The Overlord is a Buzz Bee blaster that was released in 2012 under the Air Warriors series. It requires three "AA" batteries to be operated.

In Finland, the blaster is a part of the Ruff Stuff Air Blasters series.

It comes packaged with thirty Micro Darts, a thirty dart belt and a tripod.

The Overlord is a medium-sized, fully-automatic flywheel blaster. It features a set of iron sights at its top, as well as two sling points for attachment of a carrying strap. The tripod allows the Overlord to be rotated a full 360 degrees and has a ratchet mechanism that lets it be aimed up or down.

It advertises a firing range of up to thirty feet (9.1 meters).

The Overlord has been released in the following color schemes: 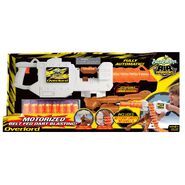 The Air Warriors packaging for the Overlord.

The Ruff Stuff Air Blasters packaging for the Overlord.
Add a photo to this gallery

Retrieved from "https://nerf.fandom.com/wiki/Overlord?oldid=190246"
Community content is available under CC-BY-SA unless otherwise noted.