The Over Under is a Total X-Stream Air blaster that was released in 2006.

The Over Under is a HAMP-style blaster with no trigger. It features two turrets, which auto-advance when the blaster is fired. The blaster has a unique ability where it can be held and fired both right side up and upside down.

The Over Under was re-released as an Air Zone blaster in 2013; this re-release sparked Lanard to sue Toys "R" Us for claiming the blaster as their own.[1]

It would later be re-released as the BallistX Blaster and Blackfire Cycle Shot.

The Over Under has been released with the following color schemes: 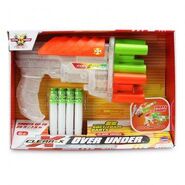 The packaging for the Clear-X Over Under.