The Omega is an X-Shot blaster that was released in 2020.

It comes packaged with a belt, ninety-eight X-Shot Darts, and instructions.

The Omega is a belt-fed blaster like the Crusher. Its lever-action priming mechanism is built into its integrated carry handle. When fired, its front barrel piece will spin around. It also features a Nerf-style slam fire function.

There are two sling attachment points atop the blaster.

It advertises a firing range of up to sixty-six feet (twenty meters).

The Omega was first discovered on shelves in Australia on July 14, 2020.

The Omega has been released in the following color schemes: 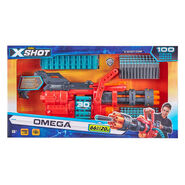 The packaging for the Omega. 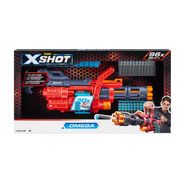 Updated packaging for the Omega.