Not to be confused with 2017 Nitro series.

The Nitron is a Nerf disc blaster that was released on September 10, 2011, under the Vortex series. It requires six "C" batteries to be operated.

The Nitron is a battery-operated automatic blaster; it uses a flywheel system similar to the Barricade RV-10 and the Hail-Fire to fire discs. Unlike flywheel dart blasters however, the Nitron only uses a single flywheel to propel discs. Built into the front of the blaster is a vertical foregrip, which cannot be removed. On top of the blaster is a tactical rail, where the scope is normally placed. It can hold another disc magazine in its integrated shoulder stock. It is considered the flagship of the Vortex series.

To unjam the Nitron, the magazine must first be removed. Then the user must pull back on the disc eject switch on top of the blaster. The jammed disc will then fall out of the magazine well.

The packaging for the Nitron.

A Nerf model firing the Nitron.

A pre-release render of the Nitron.

The Nitron with its cancelled shield. 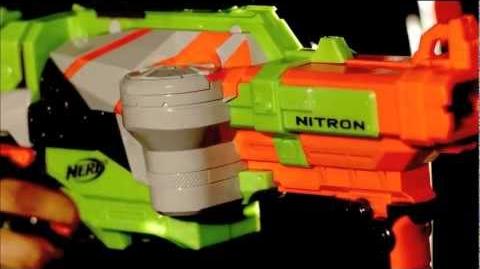 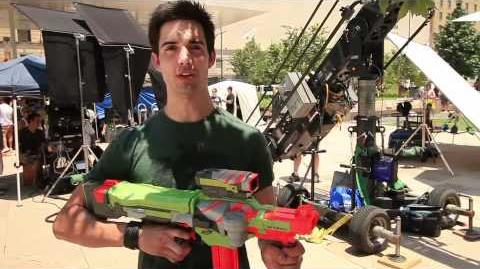