It is a Target exclusive in the United States. In Hong Kong, it is a Toys "R" Us exclusive.

It advertises a firing range of up to fifteen feet (4.5 meters). 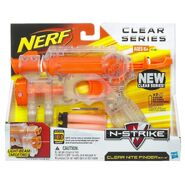 The packaging for the Clear Nite Finder EX-3.