The Ninja Commando Blaster is a Nerf blaster that was released in 2012 to help promote the 2013 film G.I. Joe: Retaliation.

It comes packaged with a detachable scope and ten Stiff Darts.

The Ninja Commando Blaster is a reverse plunger, revolver-style blaster that features a rotating, ten dart cylinder. The blaster features a single tactical rail on top of it. A single dart can be stored in the base of the blaster's handle. 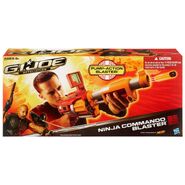 The packaging for the Ninja Commando Blaster.
Add a photo to this gallery
Retrieved from "https://nerf.fandom.com/wiki/Ninja_Commando_Blaster?oldid=186187"
Community content is available under CC-BY-SA unless otherwise noted.