The Night Talkie is a Nerf-branded Sakar International product that was released in 2015 under the N-Strike series. It requires three "AAA" batteries to be operated.

The Night Talkie is one of several walkie talkie communications devices sold under the Nerf brand including the Walkie Talkie, the FRS Walkie Talkie and the Walkie Talkie Watch. This particular model is sold in near identical form under several different toy brands, with the only difference being color schemes on the product itself. A flashlight is built into the Night Talkies which gives the product its title, advertised as being capable of being used during nighttime conditions. 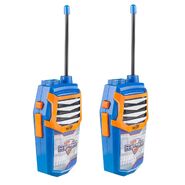 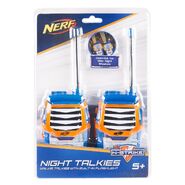 The packaging for the Night Talkie. 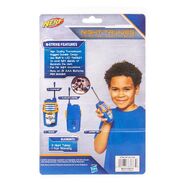 The back of the packaging for the Night Talkie.
Add a photo to this gallery

Retrieved from "https://nerf.fandom.com/wiki/Night_Talkie?oldid=182959"
Community content is available under CC-BY-SA unless otherwise noted.