Nerf Sports is a series of Nerf products focused on sport play that began in 1972.

While not as popular as Nerf blasters, Nerf Sports consists of balls and equipment for people to play sports with. Common products released under the Nerf Sports series are footballs and basketball hoops. Many Nerf Sports objects are designed to cope with any amount of rainfall there may be, making them popular among people who play street sports.

The series dates back to the early years of the Nerf brand itself, with many iconic sports products beginning production from the 80s, with various play sets including Indoor Golf, Table Hockey, and Fencing. The majority of the early Nerf toys were Nerf Sports products (or retroactively added into the Nerf Sports line), among them being the Football (1972) and the Nerfoop (1972).

The line spawned several sub-series, among them being Nick & Nerf (1995 to 1996), Head 2 Head (1996 to 1997), and most recently, Firevision Sports and Dude Perfect. The line went on a brief hiatus in 2004, when all Nerf Sports products were rebranded under the Pro Shop or Street Zone lines depending on the product. Later Nerf Sports products were not under these series.

The Firevision Sports sub-series features products made with special reflective materials that will appear to glow a "team color" (red or green) when a player is wearing special Firevision Sports Frames. The sub-series is advertised as being suitable for both day and night play.

The Koosh Vortex sub-series was merged in with the Nerf Sports series in the early 2000s, rebranding most of the Koosh footballs as Nerf products. The series also consisted of various ring blasters, none of which were released as Nerf blasters.

The Nick & Nerf sub-series featured products with a "wacky" spin on their original counterpart. As the name suggests, the sub-series was co-developed with Nickelodeon. 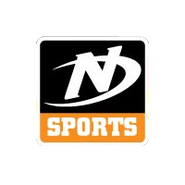 The Nerf Sports logo from 2013 to the late 2010s.
Add a photo to this gallery
Retrieved from "https://nerf.fandom.com/wiki/Nerf_Sports?oldid=198940"
Community content is available under CC-BY-SA unless otherwise noted.