The Nerf Ball is a Nerf product that was released in 1969. It was the first Nerf-branded product to be released.

The Nerf Ball is a soft, foam ball that is four inches in diameter.

Following the success of the board game Twister, Reyn Guyer and his team at newly-founded Winsor Concepts began development on their next product. Their next idea would be a caveman-themed game, revolving around hiding coins and throwing soft, foam rocks at opposing players.[1] When it came time to test-play their game, however, they found far more fun in pelting each other with the faux rocks, than with following the rules they developed, and that they were doing so without hurting each other or damaging anything around them.

This would be the epiphany that would launch their interest in a series of sports-themed product sets. Balls of various shapes and sizes would be shaped through the use of hot wire, for footballs, basketballs, baseballs, and more.

With the sets near completion, Winsor Concepts approached Milton Bradley about their product, who turned them down, due to having too many existing toy lines at the time. Parker Brothers was their second choice, and upon visiting them, shared a product demo with just their most basic ball shape. This test run would be a resounding success; Parker Brothers agreed to sell the ball and only the ball, throwing the sports game sets out the window.

Prior to its release, the Nerf Ball had a series of alternate names: "falsie-ball"[1] and "Muff Ball"[2], both used during its development. The final name, "Nerf", would be adopted from the use of padded, "nerf bars" in cars, particularly in off-roading and racing.

It would be advertised as the "world’s first indoor ball", would would be an immediate, resounding success, selling 4.5 million units[2] within its first year alone. Some of its success may be attributed to an advertising campaign with Kool-Aid, who had partnered with rock band and American sensation The Monkees. Newspaper ads[3] would be run with the band playing with Nerf balls, as would advertisements on television. At first, the Nerf Ball was only available through this Kool-Aid campaign, with a mail-in order of twenty[citation needed] box tops of Kool-Aid powder.

A successor to the Nerf Ball, the Super Nerf Ball, was released in 1970.

In 1971, the non-profit organization Consumer Reports, known for testing products of all kinds, performed a test on the Nerf Ball. Their results were summarized with the following statement:

1971 The Official Nerf Ball is tested for flammability against the standard set by the 1969 Child Protection and Toy Safety Act. The Nerf Ball failed, bursting into flames about two seconds after contact with a lit match.

The Nerf Ball failed Consumer Reports' test, although it is unknown if any action was actually taken.

It would go on to continue being listed in Parker Brothers product catalogs up to 1991, when Kenner Products was given control over the production of the Nerf brand.

The Nerf Ball has been released with the following color schemes: 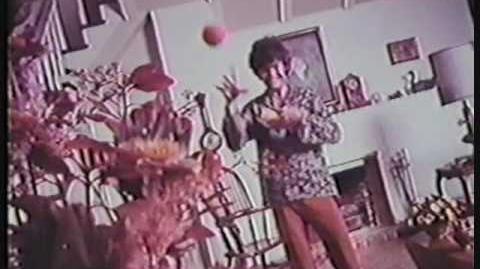