Nerf-Mobile is a series of Nerf products that was released in 1973.

The Nerf-Mobile line features six different vehicles, all of which are made of Nerf foam. The line was broken up into two separate categories: Nerf-Mobile Car and Nerf-Mobile Truck. One product, the Pickup, was released under both of these categories. Three models of each were produced, and each model had an alternate color scheme, creating a total of twelve different toys.

Each foam vehicle was advertised as being fast but incapable of scratching or damaging anything. The line was accompanied by the Nerf Animal and Nerf Critter series, both of which similarly were introduced around the same time and consisted of toys around the same price and size.

It is unknown when this product was discontinued, however it was still being sold as of 1977.

Both the 1981 Hot Shot and 1983 Motorman series could be viewed as successors to the Nerf-Mobile series. 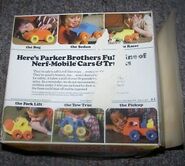 A 1974 advertisement featuring the Nerf-Mobile line.

A splash page from the 1975 Parker Brothers catalog, featuring the Nerf-Mobile line.

A page from the 1975 Parker Brothers catalog, featuring the Nerf-Mobile line.