The Nemesis MXVII-10K is a Nerf blaster that was released in August of 2017 under the RIVAL series. It requires six "D" batteries or a Rechargeable Battery Pack to be operated.

It comes packaged with a hopper, one hundred High-Impact Rounds, and instructions.

The Nemesis MXVII-10K is a fully-automatic flywheel blaster. Unlike previous blasters, the Nemesis uses a large removable hopper with an agitator that advances the rounds into its flywheels. The feeding mechanism will not operate when the hopper is removed. It also has an integrated shoulder stock.

It features a tactical rail on top of the hopper. On either end of this rail are integrated, flip-up sights.

The Nemesis was originally leaked online on January 20, 2017. Five days later, it was officially announced on multiple news media sites.[1]

The Nemesis has been released with the following color schemes: 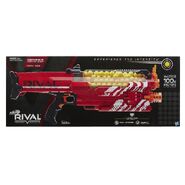 The packaging for the Team Red Nemesis. 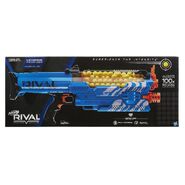 The packaging for the Team Blue Nemesis.

A prototype render of the Nemesis.