The Negotiator is a Nerf blaster that was released in spring of 2017 under the Doomlands 2169 series.

The Negotiator is a hammer-action, revolver-style blaster that can hold up to eight darts at a time in its cylinder. Like other DoomLands blasters, it has clear plastic parts, which shows the firing mechanisms of the blaster. It features a medium-sized tactical rail on top of the blaster and one strap point, under the handle. It is similar in design to the Zombie Strike Hammershot or Rebelle Sweet Revenge, but has a higher capacity. 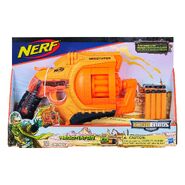 The packaging for the Negotiator. 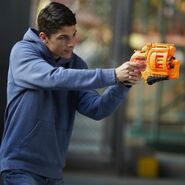 A Nerf model aiming the Negotiator. 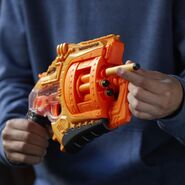 The Negotiator being reloaded.
Add a photo to this gallery

Retrieved from "https://nerf.fandom.com/wiki/Negotiator?oldid=186125"
Community content is available under CC-BY-SA unless otherwise noted.