The NanoFire is a Nerf blaster that was released in 2018 under the N-Strike Elite series.

The NanoFire is a single-shot pocket blaster similar to the 2011 Dart Tag Stinger. Unlike the Stinger, the shell of this blaster is permanent on it. It features two dart holders on the top of the blaster.

Despite having a gray firing trigger, there is no stronger orange-trigger version of it. The gray-trigger NanoFire is the only version of the blaster available.

The NanoFire has been released with the following color schemes: 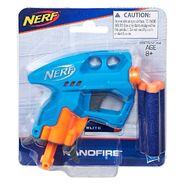 The packaging for the blue NanoFire. 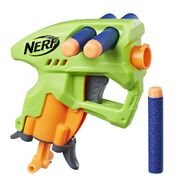 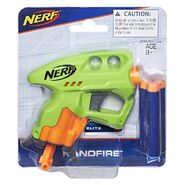 The packaging for the green NanoFire. 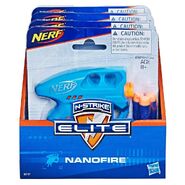 An assortment of blue NanoFires.