The NB-1 Missile Blaster (known in some countries as the Pocket Rocket Missile Blaster) is a Nerf blaster that was released in 1992 under the Original Nerf name.

It comes packaged with three missiles.

The NB-1 Missile Blaster is a HAMP-style missile blaster. Two ammunition holders are located at both sides of the blaster. A small trigger grip is located on the black handle at the front of the blaster.

Although the blaster is intended to fire missiles, it can also fire Mega Darts.[1]

Interestingly enough, the NB-1 Missile Blaster's design predates the period when Kenner began producing Nerf products. The blaster itself had been around since 1989 in the Kenner Blast Jets toy brand as the Thrust Launcher, and as the 1990 Batman Batarang Blaster. 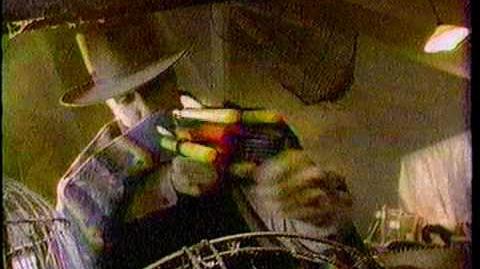